Much has been written about the street food in Thailand but until you have experienced it for yourself, you will never realize just how very good it is. I have been travelling to Thailand for 25 years and I cannot count the number of times I have passed street food vendors and shied away from their produce largely through ignorance and not knowing what was on offer.

I had a day off in Bangkok and took the opportunity to hire a guide to take me on a tour of what the streets had to offer. And goodness, did they have something to offer! A total assault on your senses, the colour, vibrancy, smell, noise, taste – nothing is left out and I hope I can share some of that with you in this post.  I have split this posting into two parts – the first part covers the day, the second covers the evening.  I hope you enjoy both.

My guide for the day, the lovely Alice, met me at my hotel for breakfast where we discussed what was ahead. In all honesty that was a mistake, we should have headed out and got breakfast on the way! Our first stop was at ATK Market – a bright, airy undercover market in which you can buy just about anything you could wish for. The section given over to food was simply stunning. The displays of fruit, vegetables and food want to make you eat and I instantly regretted having had breakfast at the hotel – I wanted to try everything. However, there was a long day ahead so I managed to restrain myself to sampling a few things I had never eaten before. 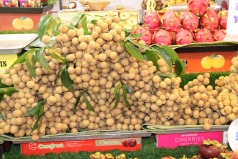 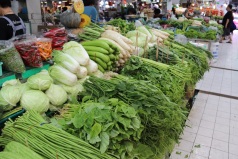 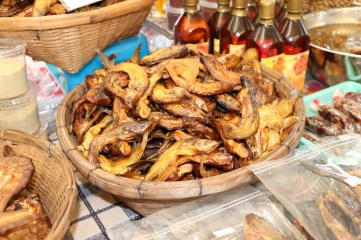 First up was Sai Krok Isan – little round balls of fermented sausage meat with vermicelli noodles cooked over an open grill. Originating from Isan in the north of Thailand, these little balls were bursting with flavor and were served with bits of raw cabbage leaf, raw ginger and devilishly hot Thai chillis. I’m pretty sure the cabbage and ginger are there to balance the garlic packed into the sausage. They were fabulous and I want to try making these when I get home.

Next, the delightfully named Cha Om Pom Pom or to you and me, Acacia Pennata Omelette. Now I thought that Acacia was a widely grown tree, or a shrub you might find in your rockery, but in Thailand, the tropical variety is a fast-growing shrub with prickly thorns on its branches and stems. What on earth possessed someone to try to eat this is beyond me, however when the ferny young leaf shoots and tender tips are used, it comes across as a herby vegetable. Cooked with eggs , the Thais called it an omelette but it is really more of a fritter and, served with a little nahm prik (hot chilli sauce), it is really moorish and I found myself wanting to go back for more.

We wandered past stalls serving vats of the most colourful, aromatic curries, stalls selling animal parts I didn’t want to know about (although Alice assured me they were delicious), fruit sellers, vegetable sellers, flower sellers, fresh meat and fish and dried fish. Many of the stalls supply the local restaurants and large orders could be seen being packaged up and hurried away. All the time we were accompanied by the comforting sounds of a bustling market and the laughter so commonly associated with the Thai race. 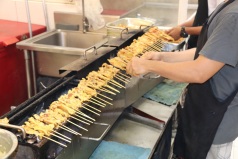 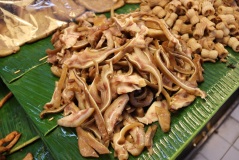 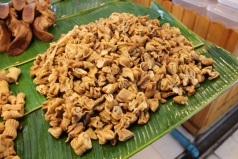 We tried a couple of sweet dishes – the first can best be described as a Thai version of a sweet Taco – Khanom Buang. The Taco shell was the thinnest and most delicate imaginable filled with a thin payer of pandan custard, sweetened egg yolk and thin slices of dried plum. The lady making these is famous in Bangkok and even has her own YouTube channel… at 10 Bhat (about 22p) per piece, or 40 Bhat for 5, these were lovely!

Next up was Khao Tom, or Sweet Steamed Sticky Rice Parcels.  I had two different types – one flavoured with Taro and one with a sweet shrimp paste.  These are wrapped in banana leaves and cooked on an open barbecue.  Both were delicious eaten hot straight off the barbecue! 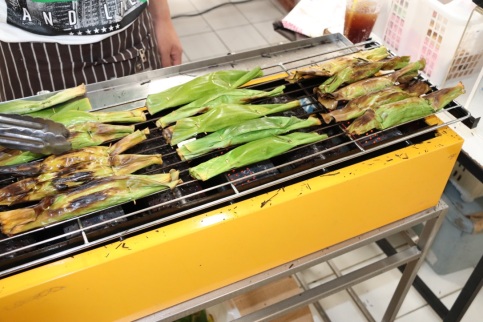 And finally, we had to try some Kanom Krok, or coconut pancakes. The stall owner spoke some English and took his time explaining the two varieties that he made – one with sticky white rice and the other with brown rice mixed with flour, coconut milk, palm sugar and fresh coconut. These little pancakes are fried on a metal plate and cannot be rushed. He explained that too many tourists want serving “now” and are just too impatient – something he could never understand when they are there on holiday, “what is a few minutes between friends”, he said – and how right he is! Well these little pancakes were worth the wait, sweet, glutinous and coconutty… Yum.

There were a couple of eating areas in the market where, for 100 Bhat (£2.25) you could get a plate of rice and a protein or vegetable dish – and what a choice you have!  Again, the visual displays and the smells were so enticing….

Next stop was a short walk (mercifully, as it was 40° outside) to the ChatuChak Weekend Market, a huge open air market selling all manner of things. The food stalls are found around the edges of the market. This market was more about cooked food than fresh produce, and again the smells coming from tiny little kitchens and open charcoal grills were so tempting.

But our mission now was lunch and we were heading for the JaeWae Louder Restaurant, a large covered restaurant that was aptly named. It was loud, or rather, its waiting staff were loud – really LOUD. Orders were not written down, they were yelled out at the top of their lungs – several times, while they were standing next to you. There never seemed to be any acknowledgement of the order which resulted in more shouting and gesticulating. Honestly, the waiters were unfit for employment anywhere – anywhere but in this restaurant where they fitted right in – they are efficient and highly entertaining. I cannot imagine what a job interview for this restaurant must consist of.

I managed to hold myself back from trying the “Stir-Fried Swamp Cabbage, however appetising it sounded, so for lunch we ate Pad Se Ew Moo, fried noodles with pork and Chinese kale and Goong Ob Woonsen, glass noodles with shrimp and ginger. All very tasty, washed down with a cold Chang beer – well, two beers as it was hot.  The total bill came to 500 Bhat (about £11.50). 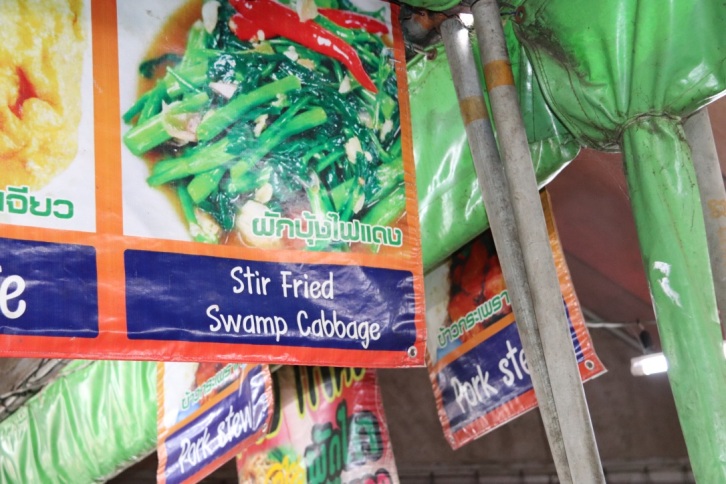 As we walked back through the market, we just had to try some of Chatuchak Market’s famous Itim Gati – Coconut Ice Cream. This is traditionally served with unsalted peanuts or sweet corn, strange you would think, but it really works – it didn’t take long to scoff the lot!

So, by now it was 14:30 and dinner was for later in the day so it was back to the hotel poolside for a siesta. Let me fill in the time by telling you a little more about my guide, Alice.

A young lady, originally from Phuket, she is in Bangkok studying biology with a view to becoming a genetic scientist. She acts as a guide to earn enough to look after herself, her younger sister and pay for her studies. The cost of hiring Alice for the entire day is 4,000 Bhat – which seemed quite a lot to me when I made arrangements to book her. But Alice pays for everything during the day, all of the food, drinks and transportation – we went everywhere in a private taxi. She is obviously educated and has a great sense of humour and speaks English very well – especially when you consider she taught herself by watching English movies. Alice knows Bangkok – the parts that you nor I would ever find and speaks passionately about her city.   If you want a tour of Bangkok or elsewhere in Thailand I can highly recommend you hire Alice, you will not be disappointed – her contact details are:

View all posts by phatphilsfood 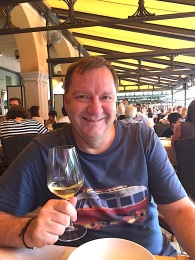